What makes a wedding DJ “good”? Caring. “Caring” feeds passion. “Caring” motivates and creates action.Very little can happen without it. Talent. Defined many ways, but is easily recognized when experienced. Love. Love fuels all great performers. Unconditional Love with no expectations. That’s why they “give” a performance – it’s an act of giving. When a wedding DJ loves his/her clients everything stems from that-every action; every decision; everything.... (read more here: Mark Ferrell's Blog) - Mark K. Ferrell
Posted by Pete Troy at 1:09 AM No comments: 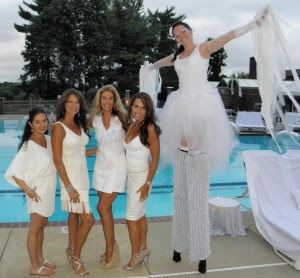 Glenmoor Country Club hosted their annual "Party in White" last Saturday. Arriving on the grounds of the beautiful country club golf course and spa the area of the event (poolside) was draped in white fabric. There were long displays of hors'doeuvres and a stocked bars. LED ice cubes, flame omitting heaters, water floats (hamspter balls)are just a few neat touches to the party. Things really took off as we mixed a blend of current and recurrent dance remixes as well as some big eighties and disco. Then a lady in white on stilts walked the crowd having pictures taken with members. at dusk Chinese lanterns were released into the sky above as guests cheered them on. The dance floor was packed while party people waved LED foam batons and sang to the music. We like to thanks the great staff at Glenmoor, The director of events Lisa Sadeghian, Chairperson to the event Sandy Grassi-Doll and the rest of the people who worked on the planning of this great happening. Video and pictures to follow:

Looking Back at This Time Last Year 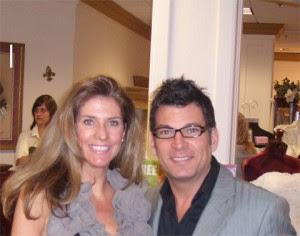 About this time last year our very own Kimberley worked with David Tutera party planner to the stars and new reality TV series “The Party Planner” on the Discovery Channel. Kim was presenting for the fashion show while David did a meet and greet for bride’s to be at Catan’s Fashions in Strongsville. Lots of great deals in fabulous fashion and one of a kind apparel can be found at Catan’s. They have great events like this often. We are proud to be in such great company with talented and professionals in the wedding and prom industry. Patrice (owner) and Brenda (Special Events Director) were present. Just a great time on a Sunday afternoon.
Posted by Pete Troy at 9:53 AM No comments:

The Cleveland City Hall Rotunda Wedding of Amy & Kevin. It was an honor and pleasure to work with the Sue and Bill Allen to create this fun Disney themed wedding experience. Complete with essential acoustic support, uplights, green screen photo booth, monogram gobo, video presentation screen, interactive entertainment and even a surprise appearance by Mickey Mouse...Happily Ever After!

Cleveland Wedding at the Courthouse 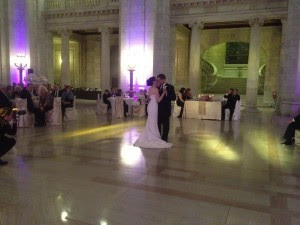 March 3, 2011 - One of the fabulous things about being in music and entertainment production is when are asked to perform for people you have meet a long time ago and haven't seen for years. We first met the groom (Andy Fernandez) when he was just a high school student at a teen night dance at Club Rio. He came up to the booth with his brother Bob and friend Dave. I invited them into the booth and we quickly all became friends. I also made them club representatives by having business cards with their names on it to pass out for free admission to their friends at school. The club became the place to be for young adults with over 800 in attendance weekly.

Years later We had the pleasure of doing Andy and Bob's sister Julia's wedding about 16 years ago.  Then surprising enough we ran into each other while Andy, his fiance' Jennifer, and his mother Mariana were looking at the Cleveland Courthouse and A Taste of Excellence to stage the event.

Above is a picture of Jennifer and Andy's first dance in a elegantly decorated Cleveland Courthouse reception. The wedding coordinator for the event was Eileen Benson. She was a pure pleasure to work with. The bride Jennifer was stunning and everything was absolutely beautiful. They even incorporated their little chiwawa Chuey into the ceremony. The music for the reception was a blend of current pop, big 80's dance and Merengue. Everyone had a great time. I was visited many times by their guests saying that they have been to many Troy Entertainment weddings. This is one of the greatest things that frequently happens to me and my staff and we are forever grateful to have met the nicest people that give us such amazing opportunities.

The grooms brother Bob was there with his beautiful girlfriend. At the end of the reception as we were saying our goodbyes he said there might be a Tri-fecta in the future :)

We congratulate Jennifer & Andy Fernandez on their Wedding and hope them love, hope, and happens throughout their lives together. 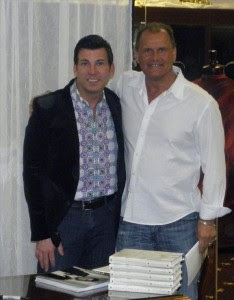 David Tutera, the wedding planner of the stars greeted brides at SA Events/Catan's Fashions in Strongsville.
Our friend and colleague Brenda Kucinski called upon us to help enhance and beautify her showroom at Catan's Fashions in Strongsville as they launched their new and exciting SA Events. SA (Socially Artistic) offers amazing centerpieces, table linens, chair covers, napkins, LED lighting, and unique glassware to the bride that is looking for the best of the best all in one place.  We set the stage to showcase their offerings with beautiful colors of pink and purple LED uplighting and illuminated the head tables beautiful iridescent fabric.
After the event started lines formed to meet David Tutera as he autographed his book and promo photos. His appearance always draws a crowd and this time was no different. We had the opportunity to meet David and work with Brenda before and admire their passion and enthusiasm working with brides to make their wedding day dreams come true. Just prior to this photo David took the time to give alteration advice to a young bride who was trying on a gown. This impressed me that he really has genuine passion for people and his craft. Brenda of SA Events has the same passion to share her expertise in the effort of making each brides vision a reality. We enjoyed the opportunity to work with Brenda, David, Patrice and SA Events, and wish them future success.

Onward and Upward,
Pete Troy
Posted by Pete Troy at 7:49 PM No comments: